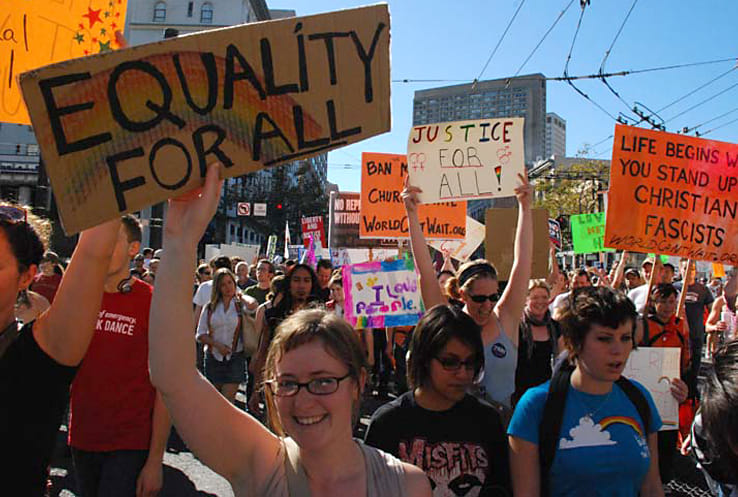 By July 21, 2021No Comments
“Equality! Equality!” The familiar tune is seen across all forms of media, ignorantly laced with amorphous contempt against authority. The crowds refuse to define equality in fear of narrowing or discrediting their position. Chaos, rebellion, and victimhood drown out intellectual discussions and opposing viewpoints. Ironic how they do so by yelling, “Equality!”
There is something missing in the demand for equality. There is no discussion on the type of equality desired–equality of opportunity or equality of outcome. One stands in contrast to the other. Again, drowning this discussion is in their best interest as any intellectual discussion would draw out the true nature of the argument.
Equality of opportunity could be considered an American ideal, although none of the sacred political documents contain any reference to equality. Individual freedoms and their corresponding responsibilites are a theme strongly desired and historically documented dating back to the Declaration of Independence which stated, “Life, Liberty, and the Pursuit of a Happiness.” These are considered sacred words by most Americans, including myself.
Equality of outcome has more closely been a French ideal. This demand for equality is historically strong in the Seine basin, where Paris is located. French egalitarianism is embodied in their national motto, “Liberté, Egalité, Franternité” which is translated “Liberty, Equality, Fraternity or Brotherhood.”
The difference between these two ideals are clear. Because Americans have a uniquely strong concept of individualism, freedom, and responsibility, any attempt to create a France in America would fail. Similarly, any attempt to create America in France would fail. (Americans would probably start by improving and straightening the Eiffel Tower. That probably wouldn’t bode well, yet the alternative is grim as the foundation is rumored to be crumbling under it’s own weight making the parallels between the entitlement society and the tower uncanny.)
American exceptionalism is rooted in that Americans hold that God Himself has allowed each of us to participate in a “pursuit” with no promise of an outcome. The alternative would leave us looking to a body of governing bureaucrats to determine, against their own interest, equality of outcome. We tried that. We also beat it when God, through his [also] well-documented interventions, sided with the American cause during the Revolutionary War. The result was a melded country that fiercely believed that freedoms are not granted by institutions or governing bodies, but by God Himself, and a realization that any departure from this belief would lead us down the historical path of dependence.